The “Heart News” section of this website attempts to update viewers about the latest events / innovations / new findings of recent scientific studies etc. about the heart. The heart news snippets have been carefully chosen to be of relevance to, and benefit, all viewers of this section. The information here is not aimed to be a substitute for an “in person” one on one consultation with a heart specialist. It only seeks to supplement that consultation with more information.

28th May 2021.
A startling finding in a recently published article in the Journal of Thoracic Imaging, authors found that upto 40% of patients affected by COVID 19 had inflammation (myocarditis) of the heart. This finding has major implications in treating multi system involvement in COVID 19 patients.

21st May 2021.
An added incentive to get the annual flu (Influenza) shot on time may be the discovery that

type-1 (occur due to plaque rupture) Myocardial Infarctions (heart attacks) are more more common with Influenza according to recent research published in the Journal of the American Heart Association. Getting a flu vaccine on time can reduce the risk of heart attacks in people over the age of 60 years, according to this new research which suggests the virus plays a role in rupturing plaques in coronary arteries.  Spanish researchers used data from five consecutive flu seasons and zoomed in on 8,240 people who had Type 1 heart attacks during the flu season. They found flu and cold temperatures were both independently associated with an increased risk of heart attack, and flu shots could significantly reduce that risk. The study suggests that the  influenza virus plays a major role in plaque rupture.

14th May 2021.
Intermittent fasting favorably alters gut flora which brings down the blood pressure in hypertensives according to a recently published article in the journal Circulation Research.

Mild COVID 19 infection is very unlikely to cause long term sequelae to the structure or function of the heart, according to a study led by University College London researchers. The study conducted from among health care workers that was published in JACC Cardiovascular Imaging, should be reassuring that mild COVID 19 disease is very unlikely to have long lasting cardiac sequelae in health care workers. This study of 149 healthcare workers from Barts Health and Royal Free London NHS Trusts is the largest and most detailed study into mild Covid-19 infection and its longer-term impact on the heart. It was conducted after  concerns that because blood clots are associated with people with severe Covid-19 infections, mild infections may also possibly cause these complications .

28th April 2021.
Truncal obesity with a lot of fat around the waist and belly could predispose to cardiovascular diseases even it the BMI is within an acceptable range according to a recently published scientific statement by the American Heart Association published in the journal Circulation. Its not enough if you are not generally obese, you also should not be obese in the wrong places to avoid heart diseases in the future.

14th April 2021.
As atherosclerosis progresses, intra plaque hemorrhages (IPHs) occur when portions of the plaque break away from the artery walls. These

hemorrhages can lead to the formation of more vulnerable plaques and blood clots, restricting blood flow to the heart and the brain and potentially leading to chronic diseases or catastrophic events like strokes. Detection of  IPHs  would therefore allow early diagnosis of impending catastrophic vascular events. New research describes details of a chemical probe that can detect rises in levels of an enzyme that is secreted during IPHs and even by unstable plaques that precede IPHs. The enzyme is called heme oxygenase-1 (HO-1). The rising levels  of this enzyme can be detected using a fluroescent probe at the bedside itself.  Dr James Leiper, associate medical director at the BHF, and one of the authors of the research paper said that  “current methods to detect IPH rely on hospital-based imaging techniques that are time consuming and expensive. This new  technology aims to produce a fast and sensitive diagnostic test that can be used as soon as a patient first presents with symptoms to allow early detection of IPH. Use of this test would allow for more rapid treatment and improved outcomes for patients suffering from IPH.”

7th April 2021.
It is now well recognized that inflammation drives atherosclerosis. The well known anti inflammatory effects of high HDL cholesterol may be  protective according to recent research published in the journal Circulation. Another reason to have high levels of “good cholesterol”.

28th March 2021.
Children who have corrective surgery for congenital heart disease at prone to hypertension (high blood pressure) later in life according to a recent publication in the Journal of the American Medical Association. Hypertension may have several underlying mechanisms, including a dysregulation of  cardiac receptors during surgery leading to sympathetic activation and postoperative development of renal injury. In addition, an upregulated renin-angiotensin system,  elevated atrial natriuretic peptide, B-type natriuretic peptide, and norepinephrine levels may persist for many years.

21st March 2021.
The health of the heart could manifest in the eyes according to new research published in Lancet EClinical Medicine. In a recent study 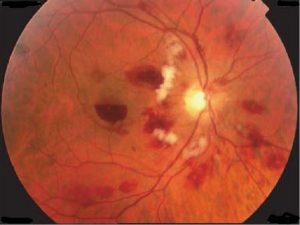 conducted at the Shiley Eye Institute at UC San Diego Health, researchers identified a possible new feature that could show that cardiovascular disease could be detected using an optical coherence tomography (OCT) scan, a non-invasive diagnostic tool commonly used in ophthalmology to create images of the retina. Retinal ischemia could be a surrogate marker for caridovascular disease according to the authors. When retinal ischemia occurs due to inadequate blood flow, it leaves a permanent scar called retinal ischemic perivascular lesions (RIPLs) which are easily picked up on an OCT scan. The finding suggests it may be possible to detect heart disease during an eye examination.

14th March 2021.
The European Society of Cardiology has recently published a consensus statement in the European Heart Journal on the gynaecological conditions that many affect their cardiovascular health. These include ecclampsia/ pre-ecclampsia, gestational diabetes, menopause etc.

7th March 2021.
Manganese enhanced MRI is the new kid on the block. It determines the infarct size and myocardial viability much more accurately when compared to traditional MRI according to recent research published in the Journal Advanced Science.

28th February 2021.
If there is a large amount of fat around the heart, if the epicardial fat volume is high, it has been identified as a risk factor for coronary artery disease in the future according to a recent study published in the European Journal of Preventive Cardiology.

14th February 2021.
According to findings in a recent study, the function of a pacemaker / implanted defibrillator was suspended when the iPhone 12 was in close proximity to the left side of the chest.  An assortment of magnets inside the iPhone 12 supports the phones compatibility with its popular MagSafe wireless chargers. When an external magnet is in close proximity to a heart implant such as a pacemaker or an AICD, its function can potentially be suspended, according to the study. The authors added that this could happen accidentally when a user carries the phone in their left upper shirt pocket. Patients with implanted cardiac devices have to be careful while using the iphone12.

7th February 2021.
There is a well established link between the brain, stress and a weakened heart according to a  recent editorial in the European Heart Journal. According to the editorial, the  greater the activity in neurons in the amygdala, the sooner the condition known as Takotsubo syndrome develops. The amygdala is the part of the brain that controls emotions, motivation, learning and memory. It is also involved in the regulation of the autonomic nervous system and regulating cardiac function. Interventions to lower stress related brain activity could potentially reduce the risk of developing Takotsubo syndrome. The syndrome, also known as “the broken heart” syndrome, is characterized by a sudden temporary weakening of the heart muscle cells  that causes the left ventricle of the heart to dilate at the apex while the base remains narrow, creating a shape resembling a Japanese octopus trap, from which the name of the syndrome is derived. This relatively rare condition was first described in 1990.  It is typically triggered by episodes of severe emotional stress, such as grief, anger and fear.

28th January 2021.
Evidence for the presence of heart disease long before symptoms occur could be present in the retina and be picked up by OCT. Early diagnosis of the predisposition to atherosclerotic heart disease could be done by a detailed retinal examination by Opthalmologists according to new research published in the Journal E Clinical Medicine.

21st January 2021.
There is a lot of vaccine hesitancy among people with heart disease about the COVID 19 jab. The American Heart Association has recently issued an official statement to take the vaccine even if they have heart disease. They categorically state that they are at a much higher risk due to the virus than due to complications of the vaccine.